I had to optimize Chrome edition for large traffic load - this is version 0.82
Please can you take a look at it as soon as possible?
I hope to release the upgrade tomorrow to make sure our servers (namely yowindow.com server) will not get overloaded.

YoWindow for Chrome is still growing rapidly.
Today we have 5000 new users more.
12000 in total.

Download YoWindow for Chrome 0.82
Get YoWindow weather app for your phone or tablet.

I cannot see any difference with early version.

After install the new version you have 2 directory's 0.82_0 and 0.80_0 .
The apps tells 0.82
The upgrade program do not deleted the old directory.
it does not matter , but we are staying critical

Hi Pasha,
I'm not able to install this version: 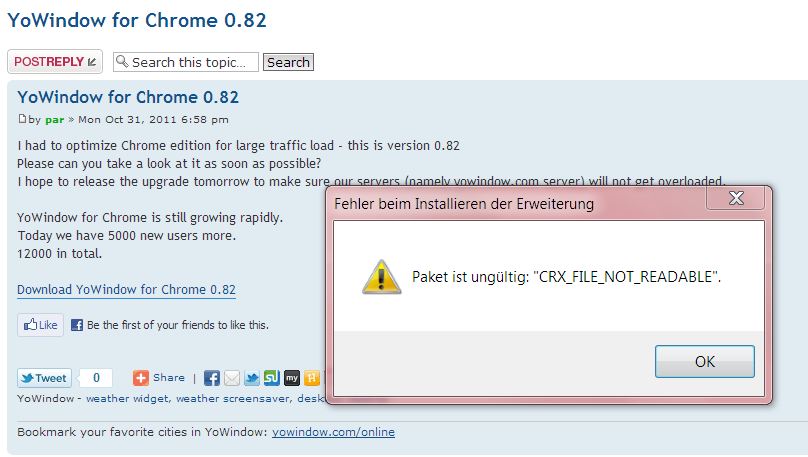 Unfortunately, I got the same warning as Mallorca.

No problems with installing on a Windows XP sp3

Jim, Werner, it may happen that our server went down at the moment you were trying to download the extension.
I have no problem download/install it in Chrome when I click on the link in this post.
So strange....
Please try again and let me know if you can download/install it.

Herman, I don't know if it is a problem or not - having old version in place.
Anyway this is Chrome's job.
I cannot impact the work of the installer.

Thank you, guys!
Get YoWindow weather app for your phone or tablet.

I just tried again this morning and got the same error. Here's what I did: I uninstalled the old version (last night), downloaded yowindow.crx to my desktop, dragged that file onto Chrome, clicked "Allow" to the yellow download of multiple files message that showed up in yellow at the top, clicked "continue" for the warning about extensions/apps that appeared at the bottom, then immediately got the attached message. While this was going on a file named Unconfirmed77358.crdownload appeared on the desktop which disappeared when I clicked ok.

When I try a second time there is no message about downloading multiple files, or creation of the Unconfirmed77358.crdownload file, but it goes straight to the error message.

When I download a new yowindow.crx and try again, everything happens the same as the first time above except this time it was an Unconfirmed33724.crdownload file.

Maybe something wrong with my procedure? It's installed that way in the past though. My version of Chrome is 15.0.874.106.

Solved part of the mystery. Before I was downloading with FF. I just now downloaded with Chrome, got the Unconfirmed..... file, dragged it into Chrome and it worked perfectly. So it was a problem with my procedure, but it has worked downloading with FF in the past. I guess no problem for regular Chrome users.

Oh yes!
I'm happy that the puzzle is solved

Thank you, Jim!
Get YoWindow weather app for your phone or tablet.